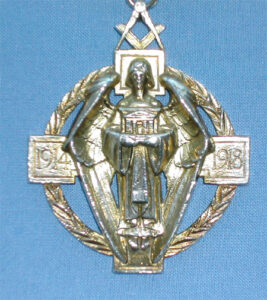 Preston Guild Lodge No 4408 is fiercely proud of being one of only two Lodges in Preston to become a Hall Stone Lodge. We remain the only Lodge that is still operational in Preston as Centenary Lodge amalgamated into Lodge of Concord and surrendered its warrant. Their Jewel is retained within Lodge of Concord.

Remarkably, from a membership nearing 500 Freemasons in the Preston Group of Lodges during World War One, only two Masons died in active service. However, many Masons suffered personal losses within families and friends and others took part in the conflict.

At the end of the First World War, and to celebrate the ensuing peace, Prince Albert, His Royal Highness The Duke of Connaught and Strathearn KG, PC, KT, KP, GCMG etc., the MW Grand Master at that time, attended an extraordinary meeting at the Royal Albert Hall and suggested that a new building be erected “in this Metropolis of the Empire dedicated to the Most High and worthy of the great traditions of the United Grand Lodge of England…” The primary goal for this proposed construction was to provide a fitting memorial that would honour those brethren who made the ‘Supreme Sacrifice’ during the course of the Great War 1914-1918. This building would also serve as a Headquarters to replace the existing complex at Great Queen Street, London.

The idea developed further and to fund such an ambitious goal, the “Masonic Million Memorial Fund” was launched in 1920. An appeal to Craft Lodges within the English Constitution was made requesting that, as the title so amply states, a million pounds be raised towards the new “Masonic Peace Memorial”.

There was little appetite amongst the seven Preston Group Lodges to become a Hall Stone Lodge. In the end, five lodges committed to donate five guineas each per year for five years as a contribution to the Fund.

Seventeen Members of the Lodge of Unanimity No 113 had different ideas. They petitioned for a New Lodge in Preston with the objective of becoming a Hall Stone Lodge. As the lodge was to be consecrated in 1922, the name chosen was Preston Guild Lodge. 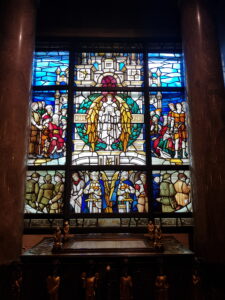 The Jewel is a representation of the stained glass Masonic Million Memorial Window within The Shrine at Freemasons Hall.

In the first Regular Lodge Meeting in September, the very first item of business reads: The WM Proposed, and W Bro Hunt Seconded, “That information be conveyed to Grand Lodge that this Lodge desires to become a Hall Stone Lodge in connection with the Masonic Million Memorial Fund.” Carried Unanimously.

A system of honorifics was drawn up which would be in the form of a jewel in order to encourage individuals to participate through voluntary contribution. A competition with a prize of £75 was also launched to provide a design template for this jewel.

Cyril Saunders Spackman won the competition, a Freemason whose mother Lodge was Panmure No. 720. His design was a jewel pendant in the form of a winged angel carrying a temple atop a symmetrical cross lying atop a wreath. At the head of the cross are the Square and Compasses, two of the most recognised and significant symbols used within Freemasonry. The dimensions of the cross appear to be perfect square, with square blocks also being emphasised on the [points] of the cross. On the side points of the cross within the square blocks, the dates of the Great War are inscribed; 1914 on the left, 1918 on the right. The colour of the ribbon is deep blue, or light blue dependent on the variant. It is reportedly recorded in official notes:

“The jewel is in the form of a cross, symbolising Sacrifice, with a perfect square at the four ends, on the left and right, squares being the dates 1914-1918, the years in which the supreme sacrifice was made. Between these is a winged figure of Peace presenting the representation of a Temple with special Masonic allusion in the Pillars, Porch and Steps. The medal is suspended by the Square and Compasses, attached to a ribbon, the whole thus symbolising the Craft’s gift of a Temple in memory of those brethren who gave all for King and Country, Peace and Victory, Liberty and Brotherhood.”

The Jewel and medals were manufactured by the Birmingham Medal Company which was set up in 1921. BMC had a policy of employing wounded and disabled servicemen from the Great War.

Three size variants of the jewel were struck:

By 1925, the Founder Members, Joining Members and New Members had raised 411 Guineas and exceeded the average 10 Guineas required. The Preston Guild Hall Stone Jewel was conferred on the Worshipful Master, Samuel Oliver, on the 2nd December 1925 by the Pro Grand Master, Lord Ampthill at Grand Lodge in London. This Jewel has presented to the incoming Worshipful Master of Preston Guild Lodge at our Installation Meeting in November ever since. It is a separate and moving piece of ritual within the ceremony.

A combined total of over 53,000 individual jewels were issued (which realised at least 530,000 guineas, or at least half the fund). In addition to the “Hall Stone Lodge Jewel”, Craft Lodges were also recorded as ‘Hall Stone Lodges’ and of 1321 that originally qualified, 88 were overseas. These lodges have their names and numbers inscribed on twelve marble wall panels in the Temple Vestibule at Freemasons’ Hall. These are sited six within the upper area or “The Shrine” room wherein are recorded the names of those brethren to whose memory the enterprise relates and which leads to, and six further panels in the lower area leading to the cloakrooms, one on each side of the staircase and one further located in an alcove. Entries are recorded in three ways:

As Lodges qualified a record as such was made at meetings of Grand Lodge. There are 10 Hall Stone Lodge panels that list 1221 Craft Lodges. A further list was made on the 22nd July 1933 in “The Freemason” publication that recorded 1249 Hall Stone Lodges. Together with the Lodges list on the Supplementary List panel a total of 1321 English Constitution Craft Lodges qualified for this honorific. Of the 1321, 88 are from Overseas Lodges.

The Supplementary List Panel records 97 Lodges (25 of which had already appeared within “The Freemason” publication). The principal question is why they were separated out. It is only surmised that these Lodges achieved qualification too late to be engraved into the main list of Hall Stone Lodges, however 25 were close and around the time of the publication entries, and the remainder between the time of the publication and the fund closure.

The panels within the Vestibule do not show the Province/Districts that qualified for the largest of the three jewels. Only three of these were ever awarded. These were awarded to the Province of Buckinghamshire, the District of Burma and to the District of Japan. However, in further recognition of their achievement, rooms 11, 12 & 17 in Freemasons’ Hall were named Japan, Burma and Buckinghamshire respectively, after them. A bronze plaque within these rooms shows this commemoration.

The “Masonic Peace Memorial” was completed by 1933. As shown in the June Quarterly Communications of Grand Lodge of 1938 the final report of the Fund recorded the building having been handed over with the building finally being handed over in 1937. The Masonic Million Memorial Fund closed its account in 1938. Ironically, the following year peace would be shattered by the outbreak of another war that saw conflict on a global scale – World War Two

. It is probably for this reason that the “Masonic Peace Memorial” was renamed to “Freemasons’ Hall” in 1939. 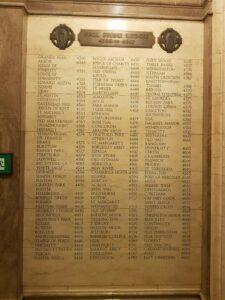 Preston Guild Lodge’s Name amongst many others