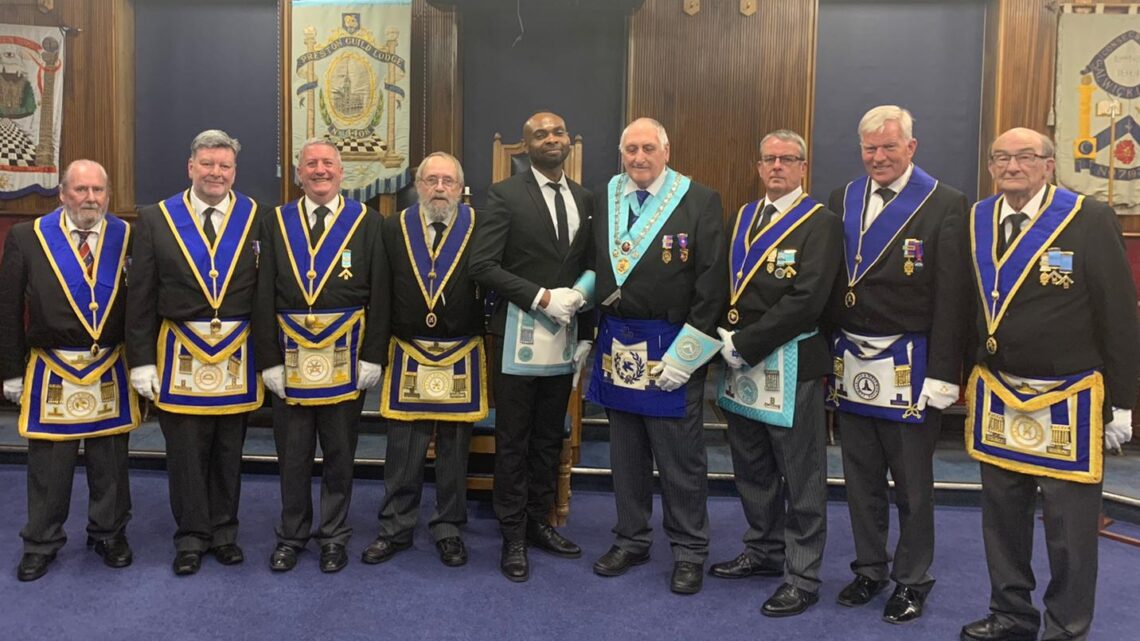 Three Provinces and One Raising

What a unique experience for our newly raised Master Mason, Boniface Ogbonna. A night when three Provinces came together to play a part in his Third-Degree Ceremony.

As part of the Preston Guild Lodge No 4408 Centenary Celebrations, the Worshipful Masters Mother Lodge, Marsden within Pennine Valley Lodge No 6183 in the Province of East Lancashire, had agreed to perform Boniface’s Ceremony. This alone was quite special and meant a great deal to Ian Greenwood, Master of Preston Guild Lodge.

To add an extra dimension, the Lodge was visited by Mark Newton, the Master of John Dalton Lodge No 7577 in the Province of Cumberland and Westmorland with brethren of the lodge, including his father Derwent Newton.

Mark and Derwent have a distant connection to Preston Guild Lodge through one of the lodges that amalgamed with them in 2004, Commercial Travellers Lodge No 3493. Mark’s great grandfather was initiated into CT in its year of consecration, 1911 and his grandfather followed him into the lodge. Derwent in particular wanted to visit Preston Guild due to that connection. So, we made sure that plenty of CT artifacts were on show.

Everyone settled down to witness an excellent ceremony delivered by Marsden within Pennine Valley, with a little assistance from a couple of Preston Guild members, the latter being occasionally wrong footed by the oddities of the East Lancashire Ritual. It was quite a spectacle for our Cumbrian visitors, as even the West Lancashire Opening and Closing was unusual to them.

As ever, Boniface was the model candidate conducting himself, with the assistance of the Deacons and Wardens with his usual confident manner. He thoroughly enjoyed his Raising and to say he was “buzzing” after it would be an understatement.

Everyone settled into a very convivial Festive Board where Ian Greenwood gave his most sincere thanks to the Master and Brethren of Marden within Pennine Valley. He so enjoyed seeing his “old time” ritual performed in Preston Guild – he does rattle on about all the time!

Mark Newton responded to the Toast to the Visitors and gave everyone an insight to his family links with Preston and Commercial Travellers. Derwent brought with him a family treasure of the 1922 Preston Guild Merchant brochure featuring some of his family members. To the delight of all in the room, he then presented a 1902 Preston Guild Commemorative Plate featuring the old Town and Guild Hall and the Mayor, the Earl of Derby. Preston Guild Lodge was named in honour of the 1922 Guild Merchant and the 1862 Town and Guild Hall features on the lodge banner as well as the founders and past masters jewels. That building had its foundation stone laid by 800 Masons under the direction of the then Mayor, Robert Townley Parker, a prominent Freemason.

The additional history learned at the Festive Board only served to make the night even more special for Boniface. Not many can say that they became Master Masons under the gaze of three provinces!