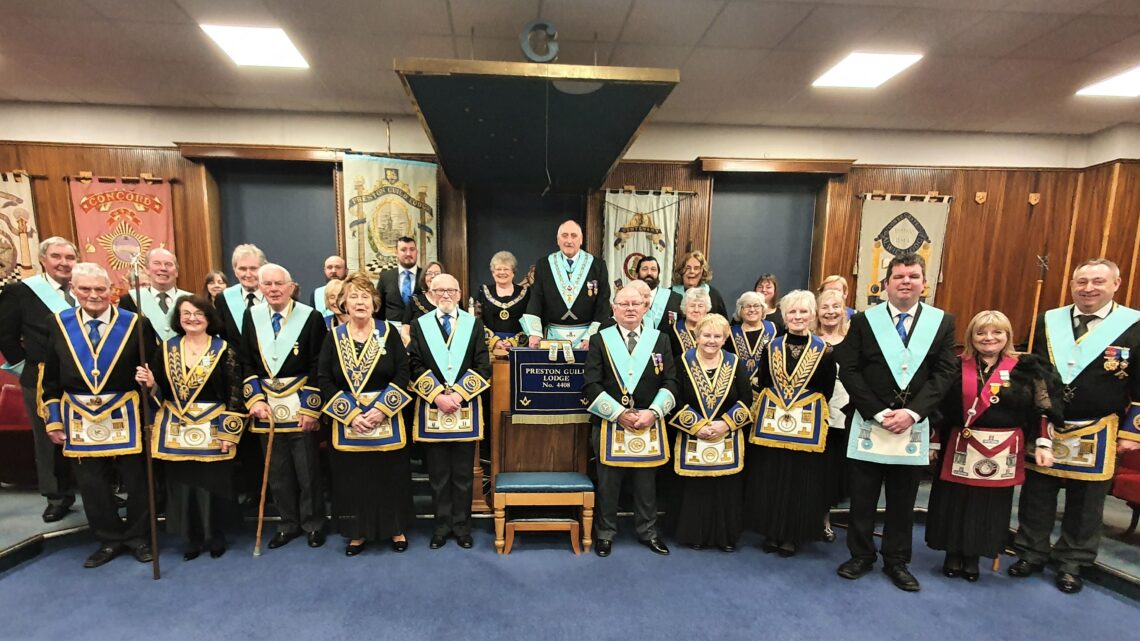 Contact was made and the two lodges have rapidly built fraternal communications and friendship. This culminated in an invitation from No 4408 to No 29 to present at the February lodge meeting at Preston Masonic Hall and then share a joint Banquet. February is the 100th anniversary of United Grand Lodge issuing their Warrant to No 4408 although the Consecration Ceremony was delayed until June 1922. As luck would have it, the secretary of No 29, Angela Seed, is the Provincial Grand Master of HFAF and she agreed to deliver the presentation.

The meeting drew in many visitors from other lodges in the province as it was such an unusual and unique event. It was good to see a full lodge room.

No 4408 opened the lodge as normal and conducted the essential business before Calling Off. The Director of Ceremonies, David Parker, then attended on the PGM and her team before returning to the lodge room to announce that she was waiting to be admitted. The doors swung open and control of the lodge room was handed to the Director of Ceremonies of No 29, Anne Godwin. The Master, officers and brethren of No 29, together with Provincial Officers processed into the lodge. Anne first presented the Past Provincial Grand Master of HFAF, Pat Rothwell, to Ian Greenwood, the Centenary Master of No 4408. Then Angela was presented to the Master and took the seat to his right.

Following the traditional heart felt welcomes, Angela was escorted to the lectern by her DC, Anne Godwin, where she delivered an excellent talk entitled “Our Brothers in Women’s Freemasonry.” The assembled multitude enjoyed a detailed history of HFAF and how it started in 1908 as an organisation for men and women. The history and travels of No 29 were also explained to the members. The presentation stimulated questions and discussion which was well received by all. Their DC, Anne, then led the procession out of the lodge room whist No 4408 Called On and concluded business before closing. Members of No 4408 and No 29 then gathered around the Masters Pedestal for a rather unique photocall.

The two lodges and the visitors then sat down to an excellent meal provided and served by Preston Masonic Hall’s in house Chef, Alistair, and his superb team.

Ian Greenwood then made presentations on behalf of No 4408. Angela was presented with a leather document holder to assist with her role as PGM. The Master of No 29, Gillian Foot, was presented with a genuine 1952 Preston Guild Merchant Memorial Medallion to reflect the origin of their name. Gillian had also prepared a “This is Your Life” for Pat Rothwell to honour her service as Past Provincial Grand Master. Ian duly presented the beautifully decorated file to Pat and all present were invited to sign it.

It can be said with absolute sincerity that we all took a huge and interesting daily step in our Masonic Knowledge.